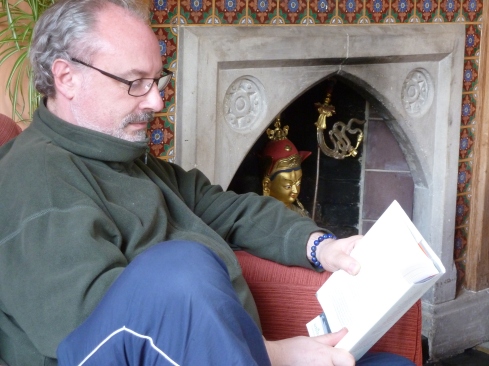 Some time ago friends of mine decided to take turns to read each other ‘War and Peace’ to help them build a continuity of awareness that carried through talking and listening. In the Satipatthana Sutta the Buddha implies we should be aware when we’re talking and when we’re silent. It is not easy to be aware while we’re talking and this is why retreats are often held largely in silence. Usually we’re not practising what Sayadaw U Tejaniya calls ‘talking meditation’.

I’m not suggesting that our speech is unethical or that we don’t take account of the speech precepts. But do we carry a continuity of awareness through from one moment to the next whilst we’re speaking or listening? There is a lot more we can be aware of: for instance are we aware of the physical sensations in the throat and face when we speak? Do we notice the sound vibrations of our own speech? Are we aware of tone and pitch – of ourselves and person we’re in a conversation with? Are we aware of our posture, leaning forward into the space between us or leaning back?

When talking about practising in daily life recently I asked the university students in drop-in Mindfulness class to sit opposite each other. One person in each pair had the task of just affirming every now and again what the other person was saying with an ‘OK’ or ‘Yes’. The other person was to repeat a single, simple sentence over and over. “Speak in a normal voice” I instructed. When I told them what the sentences were the noise levels soared and embarrassed laughter broke out. “You see” I made myself heard over them “it would be easy to do this exercise with a silly voice but the words are just a device. Just say them straight.”

For many of you this probably sounds very familiar and you might think you know where I’m going with this. In the early days of Triratna we regularly did ‘Communication Exercises’ designed to break through the barriers of reserve and habit with which we communicated with each other. The idea was to affirm what the other person was saying, to affirm them while they spoke the child-like phrases.

But actually I was getting at something else in this class. It was ‘talking meditation’. The words were deliberately simple and repetitive: “The sky is blue today”, “The birds are singing here”. “The full moon is rising”. (OK, I wasn’t sure they’d go for “the cow is in the field”!) I asked them to stick to one phrase only – though this was clearly too much for several of the pairs I could hear who swapped around a bit! I asked them to see if they could continue to be aware whilst saying or hearing the phrase.

I wanted to convey that talking and listening are just objects of experience to be aware of like any other. Starting with using simple language with little conceptual content it was easier to stay aware of physical and mental processes throughout. We can practice ‘talking meditation’ in this way.

After some 1,440 pages and over 500,000 words of War and Peace my friends found it had become a positive habit to be aware whenever they spoke or listened to someone speaking. You might find other ways that have a similar effect. Mindful singing? Mindful poetry reading? However we do it more awareness in this tricky area can only be a good thing!

Find video teachings from retreats and events on my youtube channel